Let's get something straight right off the bat.  I don't cook much.  I tried to cook for a while, but my family was not particularly complimentary.  I figure, why work so hard at something I don't like that much for people who don't like it that much, either.  So most of what I make in the kitchen comes from a box or a bag.  Sometimes, if I go for a while without really cooking at all, the family is much more complimentary. Hungry people are happier with my cooking.   It's working for me. :)

With this in mind, any crafty efforts I make in the kitchen must appear at first glance to be super, super simple.  And so it is with ENVELOPE GLUE!
Today we get to create lickable glue for our envelopes.  When we left off, we were here: 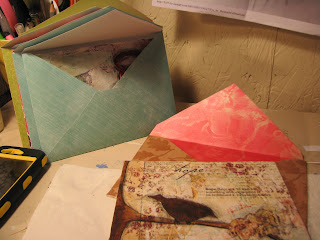 We have cute LeissnerArt Cards and handmade envelopes, but they don't close. To close them, we need glue.  I went straight to Google, but honestly I did not think I would find anything.  Lo and behold! There it was. "Envelope Glue Recipes" were right there at friendship-by-mail.com.  Weeeeee!

The first one included Elmer's Glue. Ummmm.....Mrs. Dixon, my first grade teacher, said one should not eat glue.  I'm not sure who decided, while not really edible, it was really lickable.  So, I moved on to recipe #2.


6 tablespoons white vinegar
(4) 0.1 oz. packets unflavored gelatin
1 tablespoon vanilla extract (or any flavor that you like) 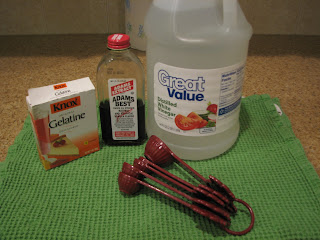 Amazingly, especially for someone who doesn't cook much, I had all this stuff already in my pantry.  I have no idea how long that gelatine had been in there.  It might work better if it were fresher, so buy new.  There are four little gelatine envelopes in the box.  You'll use the whole small box.

The family and I also had a lively discussion regarding what flavor to use.  I thought I had peppermint extract, but couldn't find it. We excluded onion juice pretty quickly.  The top contenders were Orange Extract or Vanilla Extract.  We decided orange then I accidently poured in vanilla, so there you go.


Directions:
Bring vinegar to a boil in a small pan.
Add gelatin and stir until dissolved.
Add extract and stir until mixed.
When you get it all done, there might be a few lumps.  It's not all that pretty, but this is what it looked like for me: 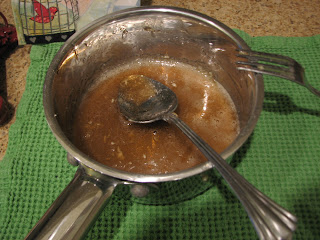 Brush on thin layer onto back of an envelope flap...Let dry. 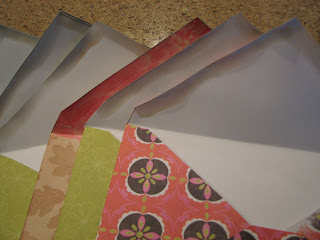 This was my first attempt, so I learned a few things.

1.  Don't just dump all the envelopes in there all at once.  I guess I forgot I was making glue, because I was surprised it was so sticky. Ha!  I would suggest shaking one packet into the vinegar at a time while vigorously mixing with a fork or whisk.

2.  The vanilla makes for a more tasty glue, but in retrospect, the color is not that appealing.  Orange might have been better. Peppermint would probably be ideal.  I'm going to use that next time, I think.

3.  Have your brush at the ready.  Try to be very neat in painting the glue.  Since it's not clear, it's more apparent that it's also not as neat as I would like it to be.

4.  If your envelope flaps curl a little after the glue, you can iron them flatter.  Just make sure the steam is not on your iron.

5.  The remaining glue you have can be reused.  Store excess glue in a sealed container and melt again for future use by putting in a pan of warm water.

Now my little cards are ready to fly off to their new homes.  I'll be listing them this week.  I think they are a sweet, fun way to economically share original artwork. Thanks so much for stopping by the blog.  If you make some envelopes, I'd love to hear about how it goes for you.  And I would love to see them.  Share them on my Facebook page!

Praying that the Lord blesses us all today with clean air and deep breaths, warm beds and sweet dreams.