Be Your Own Hero

It's probably ridiculous coming from someone my age, but it's true.  I've been waiting for someone to save me for a very long time.  Practically my whole life, really.  It had to be those fairy tales and the old Disney movies before Mulan and Brave.  Even Batman, Speed Racer, and Mighty Mouse followed the same general theme, right?  There's a damsel in distress of some sort.  Someone (perhaps a small rodent) swoops in at the last minute, cape flying, and saves the day?

I'm not a helpless person.  My parents raised us girls to be self-reliant.  I know how to change the oil in a car (a 1976 AMC Pacer, at least.  Don't test me on something made in this century).  I can start a lawn mower and use it the "right" way.  I can drive a manual transmission. With enough time and frustration, I can move a couch up the stairs and over the landing by myself.

My dad had a common response when I said I couldn't do something.  He said, "Can't never could."  On the surface, that might not make much sense.  But to me it meant, "work harder", "stop complaining",  "just do it".  Henry Ford may have said it just as well, if less succinctly, when he said, "The man who thinks he can and the man who thinks he can't are both right. Which one are you?"

I bought this awesome tooled leather cuff from Becky at FarmGirlPaints.  I've been wearing it pretty much non-stop since it arrived in the mail.  It helps me remember. 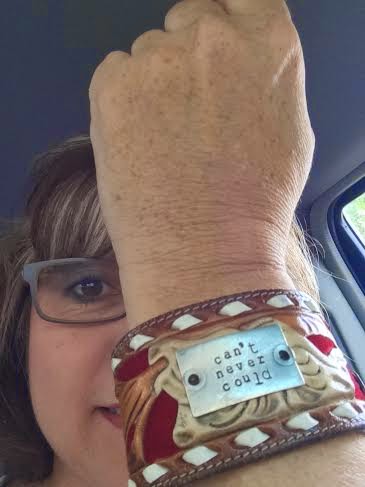 Starting a handmade business is not for sissies.  Feeling called to do something different that what you are currently doing and feeling periodically that it's really never going to happen can be defeating and exhausting.  Yesterday was one of those days.  I was flinging myself around about being a damsel in distress.  This is the result: 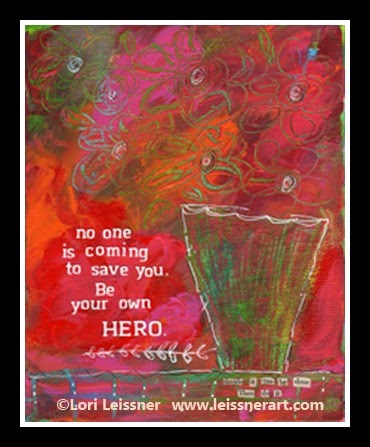 The original is viewable and available for purchase in my Etsy shop here.

Shortly after that, God spoke to me through Facebook (Ha!! I know!  It's crazy. It happens more times than I care to admit) when I saw a scripture scroll by on my newsfeed.

"Say to those with anxious hearts, 'Be strong, do not be afraid! Here is your God— he will bring vengeance, he will bring divine retribution, and he will save you."  Isaiah 35:4

I might have disputed that statement yesterday.  I might have said out loud, "THAT'S NOT TRUE!!"...a couple of times, actually.  I'm pretty sure He'll forgive me for that.  It was a momentary weakness.  If you have issues even bigger than the ones I wrestle with, He'll save you too (just maybe not in the way you have in mind or might prefer).  Ask Him.  Through Him, all things are possible.

But we both have to forget about waiting around for some human with a cape to make things right.

Pray about it.  Decide it can be done. Then do it.

Be your own hero.

Email ThisBlogThis!Share to TwitterShare to FacebookShare to Pinterest
Labels: artwork, be your own hero, etsy art, farmgirlpaints, handmade on etsy, leather cuff